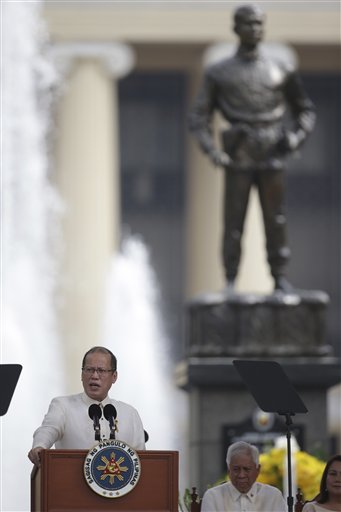 President Benigno Simeon Aquino, III hails Andres Bonifacio and uses the Guilermo Tolentino-made monument at the Liwasang Bonifacio as the illustration of the Filipino, calm but determined in the face of threats against our sovereignty in his 115th Independence Day speech, 12 June 2013 (AP Photo/Aaron Favila).

Noynoy Aquino is a walking paradox, he is an haciendero who can actually talk convincingly about Andres Bonifacio because he seemingly is trying to sincerely fulfill the prerequisites of the Supremo’s free nation–kabutihang loob and landas ng katuwiran.  Only time and history will tell.  His Independence Day speech yesterday was one of his best because it didn’t only define himself and his stand on issues of national sovereignty, but defined the spirit and culture of the Filipino as well, with the words of Bonifacio as his guide.  The Philippine Daily Inquirer had to agree.  In celebration of this speech, I am reposting one of my columns, “Walking History,” that I made for the short-lived newspaper “Good Morning Philippines,” 4 July 2011, page 7, which rooted the president’s concept of “Daang Matuwid” to Bonifacio’s “Landas ng Katuwiran.” 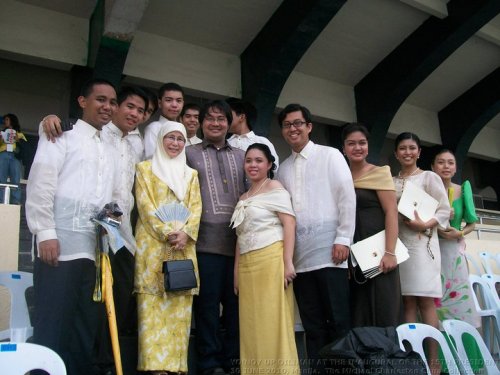 We came in our best clothes.  The Youth for Noy UP Diliman chapter attended the inaugural of the new president, Noynoy Aquino.  We campaigned for him as our way of loving our bayan.  That day, we felt that after a long dark night there can only be a beautiful morning.  A presidency that offers leadership by example—“walang wangwang.”  If he is good everything will be fine.

This is probably what people also felt the night of 25 February 1986.  People in Manila and in different provinces went out the streets when they heard that President Marcos left the country after dominating Philippine politics for two decades.  After a long dark night, tomorrow there can only be a beautiful morning.  Jubilation!  Euphoria!  Everything will be fine because Tita Cory, Noynoy’s mother, was an incorruptible housewife.  EDSA People Power was arguably our greatest moment in World History.  A successful, peaceful, “yellow” revolt was replicated by other peoples in other lands, in different colors.

The ancient Filipino psychology as studied by Virgilio Enriquez, Prospero Covar and Zeus Salazar informed us that before the coming of the Spaniards we believe that man has “panlabas,” the body, and “panloob,” what makes us human.  Panloob consisted of “ginhawa” which resided in our stomach, and it manifests when a person is healthy, lives comfortably, eats well, and is relaxed; and “kaluluwa” which resided in our brain and is what gives us our will and our feelings.

Contrary to the Judaeo-Christian concept of “soul” which leaves the body when one dies, the kaluluwa can go out of the body through holes in it when he sleeps, therefore “anting-anting” should be worn, and the light coming from such metals, preferably gold, should protect the body from darkness that might come in.  The ancient Filipinos believed that the kaluluwa had an alignment.  If a person is good, having “magandang kaluluwa, malinis na kalooban,” his kaluluwa is vertical, aligned straight to heaven.  People generally prefer having “matuwid na kaluluwa” rather than the horizontal alignment of a “maitim na kalooban,”—“halang na kaluluwa.”  Ginhawa, the most important value among ancient Filipinos, can only happen if there’s goodness in one’s soul.

The first page of the printed edition of the Kartilya ng Katipunan in 1896 written by Emilio Jacinto. From the Emmanuel Encarnacion Collection.

The belief in the kaluluwa and anting-anting manifested once again with Andres Bonifacio (nom de guerre:  Maypagasa) and Emilio Jacinto (Pingkian) in the 1890s.  My teacher, historian Milagros Guerrero, always emphasized that the Katipunan was not just a revolutionary organization but a project to create a “bansa.”  They envisioned a bayan of “mga Tagalog” (Taga-ilog, from the river, everyone in the archipelago, “bisaya man, iloko man, kapampangan man, etc ay tagalong din”) united in hearts and minds, and in that unity, “magkalakas na iwasak ang masinsing tabing na nakabubulag sa kaisipan at matuklasan ang landas ng Katuiran at Kaliwanagan.”  That true freedom, “kalayaan,” can only be truly attained if there’s kaginhawaan, and there’s no kaginhawaan without mabuting kalooban.  To sum it up, in being united, in each “Anak ng Bayan” being being good and collectively working together as magkakapatid (isang dugo), towards the betterment of “Inang Bayan,” can there only be true freedom.  Constitutional rights may be guaranteed, but if one gets to vote yet doesn’t eat three square meals a day (maginhawa) he is not truly free.  But the Katipunan didn’t stop with a good soul.  They used their hands and started the revolution that eventually successfully ousted Spain as colonizer and made us the first constitutional democratic republic in Asia. 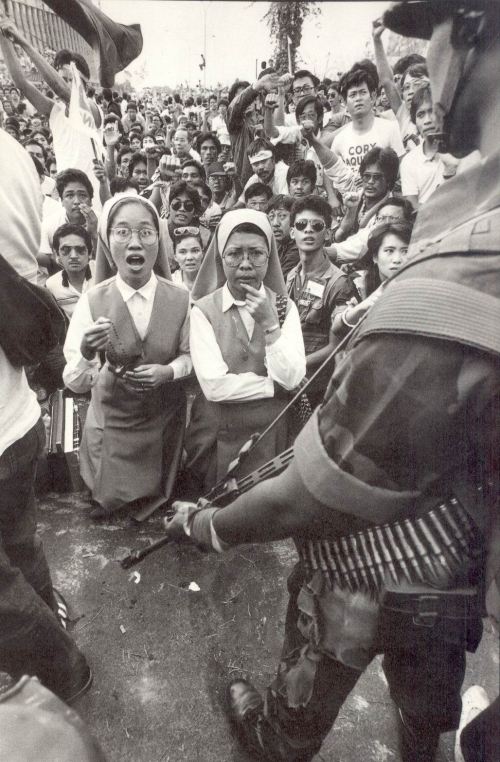 Iconic Pete Reyes photograph which captured the highlight of the 1986 People Power Revolution, when the Pro-Marcos tanks under Gen. Artemio Tadiar were peacefully stopped by the people from attacking the rebel forces at Ortigas Ave. cor EDSA.

Once again, these values were reflected in 1986.  Anthropologists Felipe Landa Jocano and Felipe de Leon in a documentary emphasized that in an almost bloodless revolt, in four days, we showed the world all our great values since:  pananampalataya, pakikipagkapwa, pakikiramay, pagiging masiyahin, bayanihan, pagiging mapayapa, and pagiging malikhain.  The world admired us, and used our way of revolution and they are now developed countries.  Many in government stopped being good after those four days and like the hijack of Bonifacio’s vision for kalayaan and kaginhawaan in 1897; they returned us to the old corrupt ways.

Despite the decline in President Noynoy’s trust rating, it is still relatively high.  For Filipinos, a good heart is important; everything starts with “katuwiran.”  Yes, it starts with “mabuting kalooban,” which the president has, but it shouldn’t end there.  Let us not be blind of what was accomplished in a year but let us also [not close our eyes for the] tasks that remain, the promises yet to be fulfilled.  Andres Bonifacio still had an unfinished business of establishing landas ng katuwiran at kaliwanagan.  I am still hopeful [“maypagasa”] that in the next five years that “Daang Matuwid” might, [just might], happen, if only the president finally takes the lead, uses his hands, and drives us to the right direction.  With a heart like that, we would surely follow him.