LOOKING DOWN ON EACH OTHER: The Filipinos and the Chinese, a History of Racism 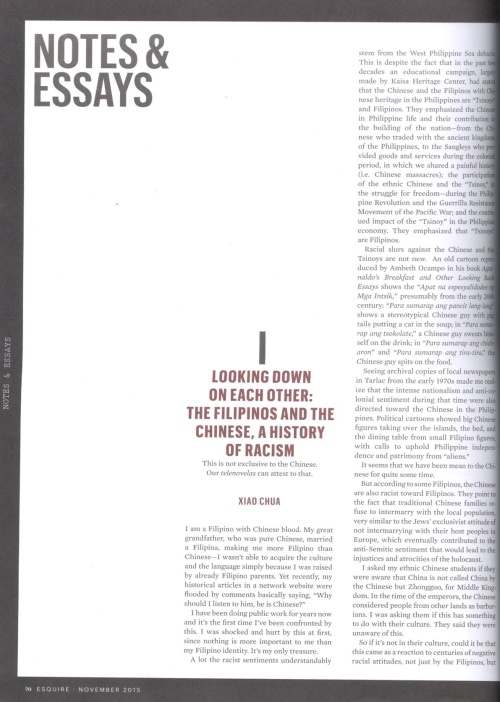 This article was published in Esquire Philippine edition, November 2015, 70-73. Reposted in celebration of Chinese New Year 2016. With gratitude to Editor-in-Chief Erwin Romulo.

LOOKING DOWN ON EACH OTHER:

The Filipinos and the Chinese, a History of Racism

This is not exclusive to the Chinese.  Our telenovelas can attest to that.

I am a Filipino with Chinese blood.  My great grandfather who was pure Chinese married a Filipina, making me more Filipino than Chinese—I wasn’t able to acquire the culture and the language simply because I was raised by already Filipino parents.  Yet recently, my historical articles in a network website were flooded by comments basically saying, “Why should I listen to him, he is Chinese?”

I have been doing public work for years now and it’s the first time I am confronted by this.  I was shocked and hurt by this at first, since nothing is more important to me than my Filipino identity.  It’s my only treasure.

A lot the racist sentiments understandably stem from the West Philippine Sea debacle. This is despite the fact that in the past few decades an educational campaign, largely made by Kaisa Heritage Center, had stated that the Chinese and the Filipinos with Chinese heritage in the Philippines are Tsinoys and Filipinos.  They emphasized the Chinese in Philippine life and their contribution to the building of the nation—From the Chinese who traded with the ancient kingdoms of the Philippines, to the Sangleys who provided goods and services during the colonial period, in which we shared a painful history (i.e. Chinese massacres); the participation of the ethnic Chinese and the “Tsinoy,” in the struggle for freedom—during the Philippine Revolution and the Guerrilla Resistance Movement of the Pacific War; and the continued impact of the “Tsinoy” in the Philippine economy.  They emphasized that “Tsinoys” are Filipinos.

Seeing archive copies of local newspapers in Tarlac from the early 1970s made me realize that the intense nationalism and anti-colonial sentiment during that time were also directed to the Chinese in the Philippines. Political cartoons showed big Chinese figures taking over the islands, the bed and the dining table from small Filipino figures, with calls to uphold Philippine independence and patrimony from “aliens.”

It seems that we have been mean to the Chinese for quite some time.

But according to some Filipinos, the Chinese are also racist towards Filipinos.  They pointed to the fact that traditional Chinese families refuse to intermarry with the local population, very similar to the Jews exclusivist attitude of not intermarrying with their host peoples in Europe, which eventually contributed to the anti-Semitic sentiment that would lead to the injustices and atrocities of the holocaust.

I asked my ethnic Chinese students if they were aware of this.  China is not called China by the Chinese but Zhongguo, for Middle Kingdom.  In the time of the emperors, the Chinese considered people from other lands as barbarians.  I was asking them if this has something to do with their culture.  They said they were unaware of this.

So if it’s not in their culture, could it be that this came as a reaction to centuries of negative racial attitudes not just by the Filipinos but by the Spaniards?

“You are right to say that the objection to intermarriage is partly a kind of defensive ethnocentrism that was reinforced by the historical racism Chinese experienced in the Philippines under Spanish rule.”  Said Prof. Caroline S. Hau, professor at the Kyoto University and author of The Chinese Question:  Ethnicity, Nation and Region In and Beyond the Philippines, but according to her there is a more compelling reason.

Answering my questions, she said that indeed the ethnic Chinese here have a sense that they are a separate and distinct “people” (lannang), so their “enclave” mentality.  But this is actually a more recent phenomenon because the ethnic Chinese migrants, who for a long time were mostly men, intermarried a lot with the local population, giving rise to the large Chinese mestizo population in the country.  If the Chinese were originally exclusivist, there would be no large portion of this country today exclaiming “I have Chinese blood.”

But China was wracked with turbulent historical occurrences from the late 19th century and for the next fifty years:  the Chinese Revolution, the Civil War, the brutal Japanese occupation (1937-1945) and the communist takeover by 1949.  Many of these Chinese migrants, which now included women, found haven in the Philippines.  For the first time it became possible to produce “Chinese families.”  According to Hau, “This trend also coincided with the rising Filipino and Chinese nationalisms (backed by state policies on citizenship, education, immigration, as well as popular attitudes toward ‘Chinese’ and ‘Filipinos’) that further hardened the ‘identities’ and ‘self-identification” of people who in earlier years would not have been so inflexible.”

But the more compelling reason for the “enclave” mentality was (and according to Hau plays “a more crucial role”) is class prejudice.  The ethnic Chinese who had made a fortune would not want to marry their daughters with people of the lower class—“the anxieties seem to focus especially on, for example, fears regarding a daughter eloping with the family driver, or a son marrying a dancer or waitress and such.”  In other words, to keep the money in the family.  If that is so, then, this is not exclusive to the Chinese.  Our telenovelas can attest to that.

Despite the resistance of a certain part of the ethnic Chinese population to intermarry, it continued to happen, especially among those who move out of the Chinese district of Binondo to have more chances of finding Filipino partners, the younger generation of parents with a more liberal attitude, or the Chinese who, in increasing numbers, had gone to university and as professionals get exposed to Filipino co-workers, and… fall in love.  And then of course, in 1975, the state granted Filipino citizenship en masse to the Chinese population.

We Filipinos are offended when foreigners throw racist remarks our way.  But we have to remind ourselves that we also have racist tendencies (toward the Indians or the blacks for example).  And this ethnocentrism is shaped by history, policy and contemporary attitudes.  Awareness that we are racist is the beginning of the solution.  Avoiding racism shows our maturity as an individual and as a nation.

Speaking of the nation, it should not defined by race, but by the feeling of wanting to be part of that nation.  I dream of one nation that is also more inclusive to the many cultures and ethnicities within it.

As for my detractors, I have learned to ignore them.

Xiao Chua is a historian and writer.

2 Comments to “LOOKING DOWN ON EACH OTHER: The Filipinos and the Chinese, a History of Racism”