TOUCHING HISTORY: Why I Attend The Ramon Magsaysay Awards Every 31 August

Why I attend the annual Ramon Magsaysay Award.  Reposted to commemorate the 105th birth anniversary of President Ramon Magsaysay and as a tribute to DILG Secretary Robredo whom I met and personally saluted in 2000 after being conferred the award.  From the Philippine Star, 31 August 2008, A12.: 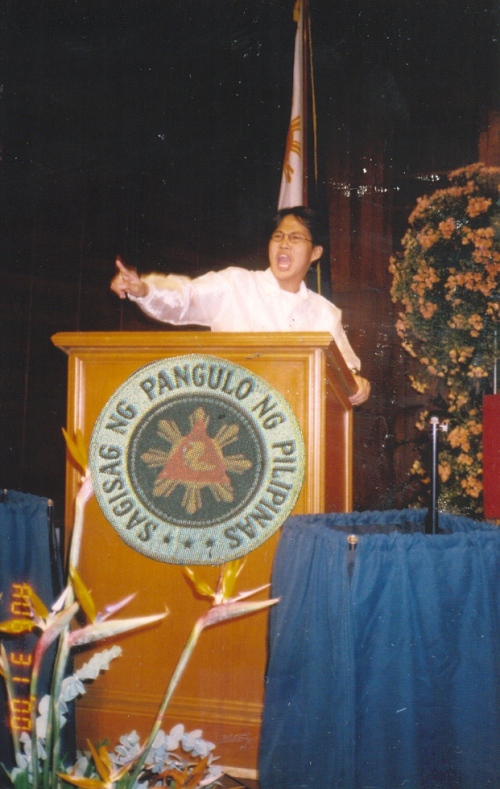 “Diligence in the work that gives sustenance to thee is the true basis of love — love for thine own self, for thine wife and children, for thine brothers and countrymen.”

“I believe that this nation is endowed with a vibrant and stout heart, and possesses untapped capabilities and incredible resiliency.”

On 31 August 2008, I will go to the 50th Ramon Magsaysay Awards presentation ceremonies at the Cultural Center of the Philippines.

Since 1998, except for a year, I never missed a presentation ceremony. You might wonder, why do I keep coming back?

It all started when I was a fourteen year-old second year high school student in St. Matthew Christian Academy in Tarlac City.  I won third place, high school division, in the very first Ramon Magsaysay Essay Writing Contest (the fore-runner of the now well-known annual Ramon Magsaysay Student Essay Competition of the Award Foundation) of Mr. Paco Magsaysay and Museo Pambata.  I was therefore invited to attend the Magsaysay Awards.

That was the very first time I heard of Asia’s version of the Nobel Peace Prize, which was created in 1957 within a year after Pres. Magsaysay’s death.  Every kid in the country knows Pres. Ramon Magsaysay as the “man of the masses.”  So as a young Filipino I felt proud that an international body that was established to honor Asian heroes, is named after a Filipino.

The ceremony in 1998, was not only special because of the 40th year of the award, but also because the foundation was honoring President Cory Aquino—our very own cabalen from Tarlac, for the category “International Understanding.”  My Aunt Edna Briones agreed to accompany me after being notified the morning of the ceremonies how to claim my prize-money from the essay competition in Makati before proceeding to the CCP.  We arrived late for my first Magsaysay night and was even wearing sando as undershirt for my Barong Tagalog (a common practice in the provinces).  I only realized I made a mistake with my choice of outfit when guests started looking at me strangely.  For it was a formal affair, attended by famous personalities with the President of the Philippines as guest of honor.  I began counting how many people I was seeing at that time who were familiar to me.  After the ceremony, I hunted all of them to ask for autographs and took pictures of them.  That night, I was literally rubbing elbows with public officials, businessmen, artists, actors, broadcasters and academics.  I met Sen. Jun Magsaysay and had an impression that he got the simplicity and humility of his father.  It was all overwhelming for a kid from the province.  I shook the hand of the person who inspired the People Power Revolution (Pres. Cory Aquino), and the hand that signed landmark measures which moved our economy (Pres. Fidel Ramos).  I was touching history!

But what struck me was the simplicity of it all.  Yes it was formal, all right, but not grand.  Stately but understated.  The emphasis was not on the people, but on what these people represented.  As a kid, with History as my favorite subject, I always thought of how I can really show my love of country without necessarily being a big man or a dead man.  As I was listening to the citations of each awardee, the answer to my question dawned on me:  Be the best that you can be, and do your share. 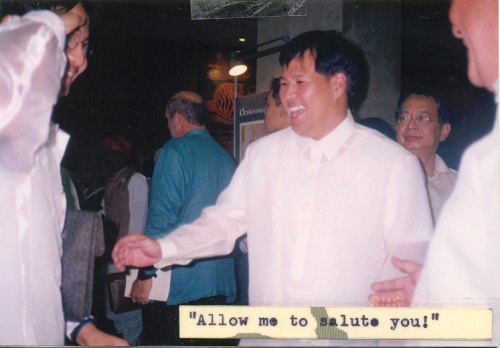 From then on, every year, I travel from the province to attend the awards night like a vow—panata.  In 2001, I became a history major at the University of the Philippines in Diliman and I still continue to attend.  It was only in 2003 that I was not able to attend the ceremony because we went to a class field trip in Mt. Banahaw.

Ten years since and a bunch of autographs and memorabilia which I piously collected, why do I still return to witness a formal ceremony over and over again?

The reason is personal.  It is in the annual Magsaysay night that I find great inspiration.  The significant stories (as historian Zeus A. Salazar puts it, kasaysayan must be “salaysay na may saysay”) of the awardees inspire me to make a difference, in an environment where the non-conformists are persecuted.  These stories teach me to fight for principles even if victory is not sure.  These also touch my heart and convince me to do my share in lifting the spirit of others, in a nation that is in crisis and despair.

Trustee Emily Abrera expressed what I always felt in her welcome remarks two years ago when she said that the ceremony is like the sacred gathering of our ancestors in an ancient ritual, “the anointing of heroes.” She added, “It is said that you cannot be around great people and not vibrate to the same high frequency.”

After every presentation ceremony, I feel recharged with the inspiration of these stories.  Believe me, the Ramon Magsaysay Award has changed my life.  When I graduated in 2005, I chose to take a path less travelled by young people like me.  I decided to teach history in the premier state learning institution in this country.  And I wish to remain a teacher despite the sacrifices.  Who knows?  That by being the best teacher that I can be, telling my students to look back at their sad yet great past in the perspective of their own culture, I can inspire my students to be proud of their country.  And when this new generation takes over the country as political, economic and social leaders, they will be an asset, not a liability. A better Philippines is not a dream, I HAVE SEEN IT!  It is a vision that I am sure will come true if the young generation is inspired.

I believe that great inspiration is contagious.  I will tell my students about the Magsaysay Awardees.  They will see how most of the awardees were simple human beings.  The main thing they had in common was the greatness of spirit to help those in need.

Michael Charleston B. Chua, 26 (2008), taught at the University of the Philippines Department of History for three years and is finishing his master’s thesis on “Imelda’s Manila.” His essay “Ramon Magsaysay:  Role Model for the Youth” placed third in the high school division of the very first Ramon Magsaysay Essay Writing Contest in 1998.  The author can be reached at xiaoking_beatles@yahoo.com.

One Comment to “TOUCHING HISTORY: Why I Attend The Ramon Magsaysay Awards Every 31 August”