BLESSED ARE YOUR GRANDCHILDREN: A Letter for Our Veteran Lolos at Lolas 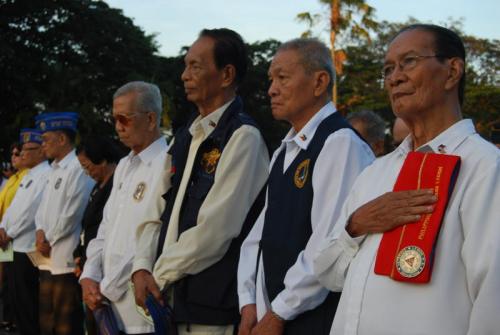 They told us that you are our heroes!

But for our generation, the hero we know of is a Hercules, a powerful deity in Greek Mythology, or a José Rizal who is super intelligent, or a Superman, Spiderman, or Batman with unique powers.  It seems hard to become a hero.  You have to be famous, remembered.

But we do not always remember you, we do not, always care for you.  Many of us don’t even know what you have fought for.

But we have to learn that the Filipino hero, “bayani,” before the Spanish colonizers came, was the ordinary soldier, timawa, hangaway, mangangayaw, bagani.  It didn’t matter to them if they will be known, as long as they were fighting for the things most important to them—life (buhay), well-being (ginhawa) and honor (dangal).

The Filipino concept of “bayani” has more meaning for us.  Because just as I am today, before the Motherland called you to serve her in 1941, you were back then just a son, a father, a mother, a student, a worker, a farmer.  Exposed to the horros of war, and matured instantly from little boys and girls to real men and women.  You proved to us that even if you were not supermen, you can be heroes.

But some people tell us that you, Filipino veterans, lost the war.  That the real liberators of this country were Gen. Douglas MacArthur and the Americans.

But if we’re going to know the real story, lolo and lola, you are victorious!

Your life then was happy and peaceful, the image of our President Manuel Quezon was that of a strong leader, and we were protected by the mightiest country in the World.  How can the Japanese fight us if they were shorter, their products we thought were all substandard.

But they’ve been watching us closely for quite some time.  And on 8 December 1941, they caught us by surprise.

The Japanese forces were surprisingly strong.  MacArthur wasn’t able to act decisively in those early hours.  It was Christmas time but you have to leave your families.  And you were excited.  In your youth, you thought that war was just a picnic.

But it was not to be easy.  Only 12 bullets were given to each of you when you confronted the large Japanese forces in Lingayen.  You needed to retreat.  The enemy’s number was so large that you, the Filipino-American forces, were sent to Bataan and Corregidor to concentrate in defending the Motherland.

US President Franklin Roosevelt promised to send you reinforcements of food, medicine and additional forces.  You were in high morale.  The Japanese cannot enter Bataan.  All of Southeast Asia already surrendered to the Japanese, except Bataan and Corregidor.  Japanese propaganda even used psy-war techniques like showing you pictures of families and beautiful women, but you didn’t go home.

But the American government changed their policy to prioritize the greater enemy—Hitler first.  There will be no reinforcement of food, medicine and additional forces.  They left the Filipinos and even their own countrymen here in the Philippines.  Even if MacArthur and Quezon left, even if you were getting weaker, more hungry, longing for the embrace of your loved ones, and seeing your friends die in front of you, you didn’t go home.  You continued to fight.  Lacking of bullets, you just used the big rocks from Mt. Samat against the Japanese.

You told us that if the Americans didn’t surrender, you were going to fight to the death!  Why?  Because you were thinking of the life, well-being and honor of your children and grandchildren?  Did you realize that because you continued fighting, the Monkey Point Station in Corregidor was able to transmit important information crucial to the victories in Coral Sea and Midway, which was decisive to the eventual victory in the Pacific?

Bataan fell, Corregidor surrendered, we were still the last country to surrender to the Japanese in Asia.  According to British Prime Minister Winston Churchill, you were the “Greatest Warrior in the World.”

Even if they made you walk in the “Death March” under the heat of the summer sun for about 133 kilometers, hungry and thirsty, you still helped your weak comrades to walk on, you didn’t want them to be in trouble, bayoneted.  The real death march was when you suffered hunger, disease, and the heat in Camp O’Donnell, where every day, the procession of dead bodies never ended.

But you are not losers.  Yes so many fell, but Bataan and Corregidor only became many with you, the guerillas in the provinces around the country!  You came from different groups of young people and soldiers, many of you from different colleges and universities in the country.  You continued the fight, Marking’s, Hunter’s ROTC, Hukbalahap, and many others.

You liberated the country even before the Americans came.  Their return and “liberation” of our country was made easier because of you.  And aside from the Japanese atrocities, the American artillery bombing of Manila made it, “Second most destroyed Allied city in the world.”  It seems they helped in the destruction.

In the film, “The Great Raid,” the Americans spearheaded the victory to liberate the biggest Japanese POW camp in the Philippines.  But in fact, the role played by Capt. Juan Pajota and his Filipino guerillas was crucial in the operation. In Bataan and in Cordillera, the Ifugao warriors joined the fight.

And more victories happened, in Bessang, in Kiangan.  In September 1945, Gen. Tomoyuki Yamashita surrendered to you, forces of the USAFIP-Northern Luzon, but why is it that in books and films, only the Americans were the victors?  They were with us, we were partners, but they weren’t the reason.

No!  We became free because you sacrificed your youth.

We know the names of the heroes of war—José Abad Santos, Gen. Vicente Lim, Capt. Jesus Villamor, Sgt. Jose Calugas, Tomas Confesor, and Guillermo Nakar.  But you veteran lolas will not be left behind with your heroism.  From your important role in healing the sick, giving of food, spying to your participation in the armed struggle you were there:  Magdalena Leones, Remedios Paraiso (alias Commander Liwayway of Tarlac and Pampanga), Felipa Culala (alias Dayang-dayang), Celia Mariano, Yay Panlilio, Josefa Capistrano, Conchita Sunico, Maria Orosa, and Josefa Llanes Escoda.  Even the Japanese who married a Filipino, Masay Masuda Almazan, helped in saving so many lives from the brutality of the Japanese. in San Narciso, Zambales.

Veteran lolos and lolas, we hope that we, the younger generation, will remember that you are the reason why we can do what we like.  Even if our young country is still poor, we can still have life, well-being and honor because you sacrificed your youth, its well-being and joys, and your own life.  We will not be here if not for you.

Andres Bonifacio, the Father of the Filipino Nation, said, “[Adopt] the country if your desire is to end your suffering, for her progress is for all.”  Thank you for adopting our “bayan.”  And since you adopted our country, we are all your grandchildren.  We are honored and we salute you.

Because we owe you so much, we have to ask, what should we do to be worthy of your sacrifices.  We are only young, we do not have power, we do not have wealth, we sometimes even desire to leave this country forever and some of us want to forget we are Filipinos.

It is not enough that we give you proper compensation.  We need to continue your love of country in our generation.  But do we need to always die so we can show our love for country?  Not so, as according again to Bonifacio, “Diligence in the work that gives sustenance to thee is the true basis of love—love for thine own self, for thine wife and children, for thine brothers and countrymen.”

This is our pledge to you, our lolos and lolas, and to our “bayan.”  In our own little way, with our best, we are going to promote life, well-being and honor as you have done so during the war.  We are not going to belittle what we can do as individuals.

Because in fact, before you became heroes, you were first a child, a father, a mother, a student, a worker, a farmer.

Why do I love my country?  Because of warriors like you who sacrificed everything so I can live—the hangaways, the members of the Katipunan, the World War II veterans, those who fought against tyranny, and the soldiers who continue to offer their lives to secure our freedom.

We are warriors against corruption and poverty.  This is our pledge.  I hope you also become proud of us.

LET US SHOW THEM THAT THEIR SACRIFICES FOR US WERE NOT IN VAIN.]

Michael Charleston “Xiao” B. Chua was the former Vice President of the Philippine Historical Association and teaches History at the De La Salle University Manila.  He is one of the panelists of the first reality political talk show on Philippine television, The Bottomline with Boy Abunda.  “Mapalad Ang Inyong Mga Apo” is now a documentary directed by Xiao Chua and Irineo Hernandez, III and was produced by the Multi-Agency Task Force for the 2011 Observance of the Araw ng Kagitingan and Philippine Veterans Week.

One Comment to “BLESSED ARE YOUR GRANDCHILDREN: A Letter for Our Veteran Lolos at Lolas”